As much as I love my 2004 911 Carrera, I found the factory CDR-23 radio a bit weak in regards to tuner sensitivity and no inputs other than a CD changer. After reading a few articles on several forums where members upgraded their own audio systems, I thought, if they can do it, why can't I. The articles had links to wiring diagrams and connector pinouts, which proved very useful.

I decided to install a system with CD/DVD/MP3 playback, HD radio, satellite radio input, iPod, memory card, and USB inputs, rear camera input, Bluetooth phone, and navigation. This system would be twice as tall as the factory radio, a double-DIN size factor, rather than the single-DIN opening for the factory radio. This meant that I would need to move the climate control unit and make modifications to the factory radio frame.

Here is the dash and console before any modifications were made: 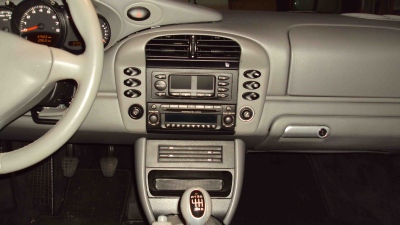 My 2004 911 uses the MOST fiber optic system to carry the CDR-23 audio to the amplifier (booster) located in the front trunk. Because my system is a non-BOSE stereo system, it uses 4-ohm speakers in the dash, doors, and rear, instead of 2-ohm speakers. 4-ohm speakers are compatible with many more after-market systems. I would not be able to reuse the stock MOST amplifier. I decided adding a new amplifier could be a future project, so I only needed to run the speaker output from the new system to the trunk, where I could connect it to the stock wiring harness speaker connections.

After opening the trunk and engine compartments, and disconnecting the battery, I removed the horse-shoe surrounding the radio and climate controls and disconnected the plugs from the attached switches. I removed the climate control unit and the factory radio. I then put speaker wires into a wiring loom and fed it through the dash and over towards a rubber plug located in the driver-side foot-well. 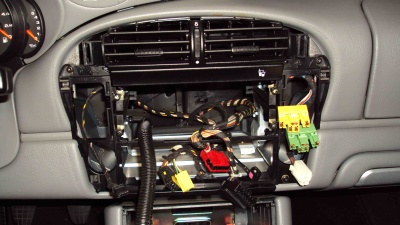 Next, I removed the black plastic frame that holds the center air vent, cup holder, climate controls, and radio. 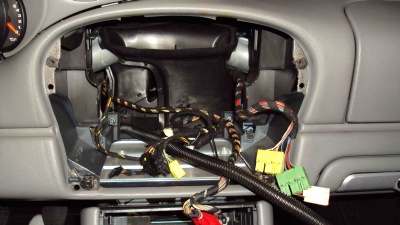 I then removed the CD holder and storage shelf from the lower console. 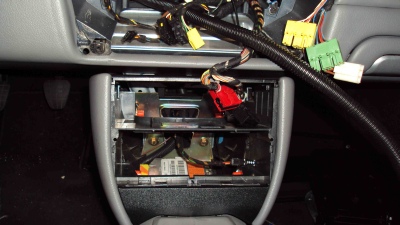 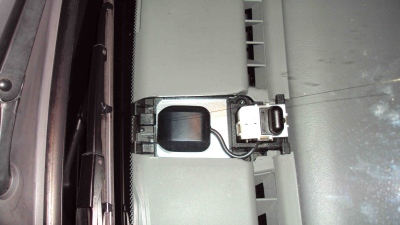 Following the instructions that came with the double-DIN kit and the new radio, I made connections to the speaker wires I had installed and tapped into the power and speed signal leads that were available on the factory wiring harness.

I also followed the instructions to modify the factory plastic radio frame, which included cutting the climate control support and enlarging the frame’s opening. I could then install the new double-DIN metal radio cage into the plastic frame and put it back into the dash. 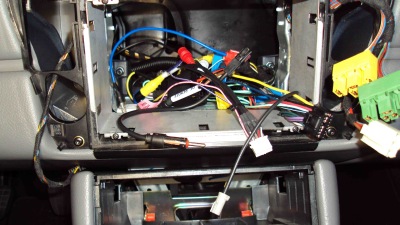 I had to unbundle the climate control wires in order to snake the red and black connectors down the back of the dash separately to their new location in the lower console. 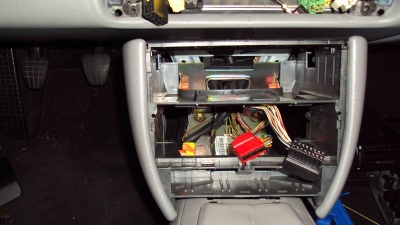 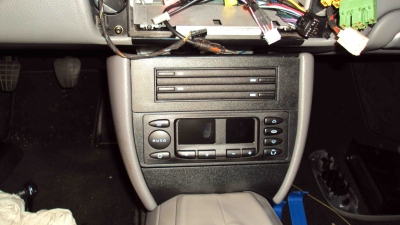 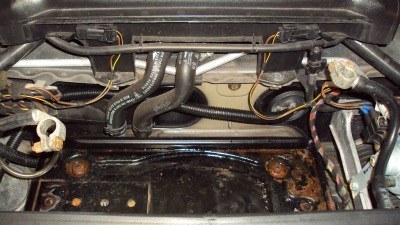 The loom then ran behind the felt covering on the inside of the trunk to the factory wiring harness where I could connect it to the speakers. Because I have six speakers, and only 4 channels of audio, I connected the front dash and door speakers in series and connected them as the front. I needed to adjust the front/rear fader on the radio to accommodate the new 8-ohm load. The orange wires on the plug that’s not connected to anything is the fiber optic connector that I left in place. 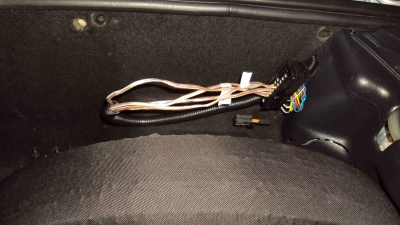 I installed a backup camera mainly because the system could accommodate it. That turned out to be a more time consuming adventure than the radio install. I had to remove the seatbelt hardware and trim on the passenger-side “B” pillar in order to remove the side-wall cover on the passenger-side rear seat area. There’s a large sound deadening pad that needed to be removed in order to access a rubber plug that enters the engine compartment. 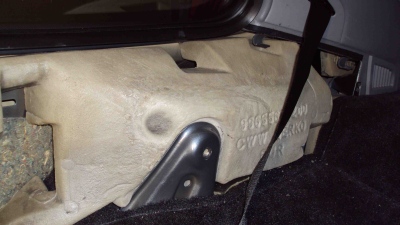 A number of people who installed backup cameras tapped into the reverse signal wire available on the control module located under the driver’s seat. Since I had to run the camera video from the rear to the dash anyway, I chose to run the reverse signal from there as well. I ran the camera video wire and the reverse-signal wire through the rubber plug into the engine compartment. I then enclosed these wires in a wiring loom to protect them. 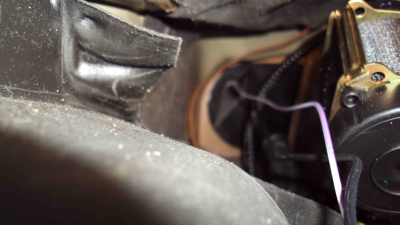 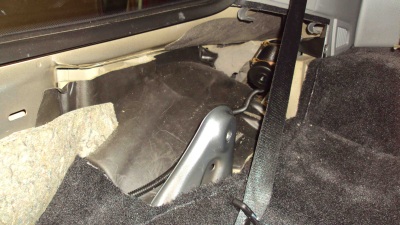 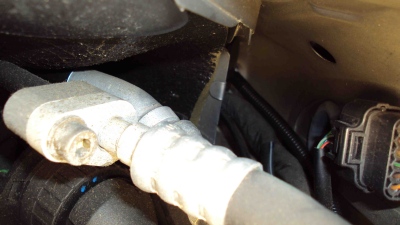 The camera was mounted using the rear license plate screws. I had to cut off part of the camera holder in order to leave the registration sticker visible. I threaded the camera wires through the tow hole behind the license plate and up into the engine compartment. There’s still room to screw in the tow hook (if needed). 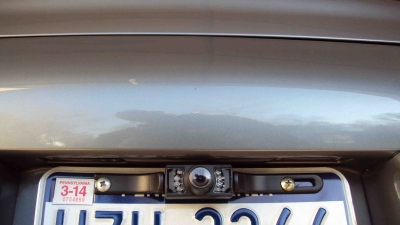 The camera needs power when the car is in reverse. I removed the driver-side tail light assembly and tapped into the leads on the backup light socket. 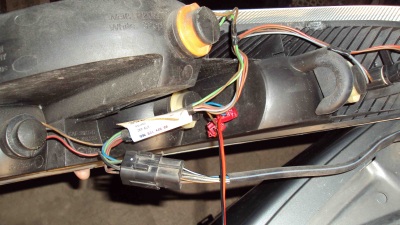 The backup light wires, camera power and video wires, and reverse signal wire were all brought together in a surprising open area in the engine compartment. 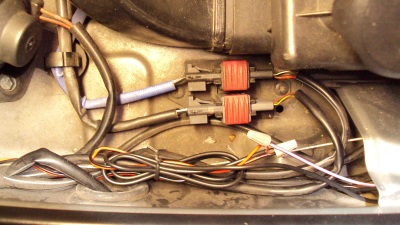 The two antenna leads and all of the connectors were then plugged into the back of the radio and the unit guided back into the dash and secured. The double-DIN kit contained a front bezel that really made the install look factory. Here is the completed project. I would be more than happy to answer any questions or provide assistance to anyone embarking on a similar project. 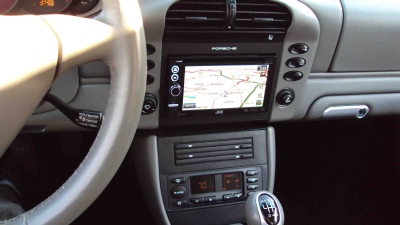